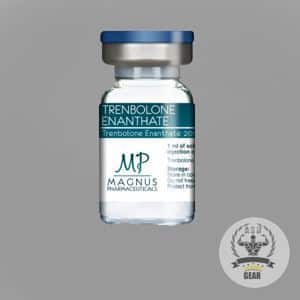 Trenbolone Enanthate 200 – is an injectable AAS with a high anabolic and androgenic ratio. Enanthate is a long ester and is good during the bulking cycles. Tren 200 Enanthate is considered as one of the most powerful steroids on the market. In sport, environment athletes called it as a king of the steroids.

Tren 200 is five times stronger than any of testosterone. But the more powerful AAS is, the more side effects it might bring to you. Trenbolone Enanthate increase muscle growth without any water accumulation boosts your energy and put athlete performance on the few levels up. The steroid reduces the level of cortisol, which increases fat storage, and breaks down proteins. As a long ester, it stays around 14 days after injection. So one injection per week would be enough.

Tren 200 is quite a unique AAS and can be used for different goals in the sport. Either you can do bulking or lean mass gaining or cutting cycles or even strength gaining tren can be used for all of them. Due to its long half-life, it is better to use it on a long cycle.

It is strictly not recommended to use this steroid by women. Due to its high potency of side effects which can be long-lasting. Tren 200 is a derivative of Nandrolone and doesn’t convert to estrogen thus it is affecting your prolactin level. So, it’s always good to have Dostinex on hand during any Trenbolone cycle.

Tren 200 does not only boosts your protein synthesis but also protects it which is the key for both cutting and post-workout. Tren Enanthate as well increases blood red cells in your body which means you will get more oxygen. More oxygen means that the athlete will get more power and stamina. The research tells us that trenbolone enanthate 200 has all the abilities to make you stronger and get all the necessary power in a very low time frame.

Ok. Let’s review all positive sides of Trenbolone Enanthate 200 and the results which can lead to below:

Due to its quick and powerful properties, the significant results athlete can see already after one and a half months. On average, the cycle length comes up to 8-12 weeks. It can be slightly longer than that period but you should always keep in mind that the longer cycle is the more side effects, you can get.

Tren 200 proved itself very good in combination with any Testosterone or Stanozolol. Such a combination as tren and Winstrol showed a great synergetic effect when are taken together.

For beginners, it’s recommended to take 200-400 mg weekly. If you really want to see results, the dosage should start from 400mg weekly and up. Some of the experienced athletes use up to 800 mg weekly. But for such a high dosage, you should clearly know the steroid mechanism.
An athlete should clearly understand that the stronger steroid is the more organized all the training process should be with additional rest and proper diet. The real results are coming not from the higher dose but from higher discipline. Don’t forget to take sports nutrition all the time. Also, if you use an oral form of trenbolone then don’t forget about a liver protection medicine during and after the cycle. A proper PCT Protocol is a certain must after any tren 200 courses.

Let’s review now which tren 200 side effects can occur if you are using it wrongly.

Trenbolone Enanthate 200 flu is a common side effect that brings all the symptoms of flu. Night sweats are the other common side effect of tren 200. During the night your bedsheet can literally become wet. Due to the higher amount of red blood cells you get higher blood pressure. High blood pressure can lead to insomnia. Also as a side effect Tren 200 is increasing your heart rate. So, if you have any heart problems it’s better to avoid using any of trenbolone.