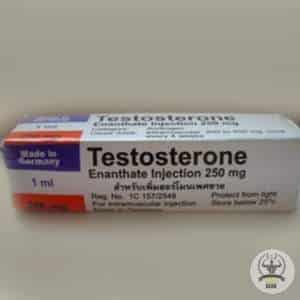 Testosterone Enanthate is an injectable steroid. It’s probably one of the most common forms of testosterone. Test Enanthate anabolic to androgenic ratio is 100 to 100 in fact. The test is basically the benchmark point for all the drugs that are tested against androgen and anabolic potency.

The half-life of Testosterone Enanthate is approximately 8 to 10.5 days. The detection time for testosterone cypionate and enanthate is three months. Doses of the long esters of testosterone are 400 – 500 mg weekly. This is a regular dose. But it varies from athlete to athlete. There are some who put 3000 mg weekly and one of the craziest put 5000 mg weekly. So the range of doses with testosterone is massive.

Female athletes generally put something between 50 mg and 100 mg per week. Obviously using an ester of testosterone by females will lead to virilization and male characteristics development. So testosterone is not the one that’s highly recommended but it does get used probably more often than we realize.

Testosterone Enanthate is not a slow-release. This is where a lot of people get wrong with ester drugs. There is always a release upon injection and quite spy in fact when a 194mg and that’s actual hormone was injected, 24 hours later levels peaked at 50 mg per ml and they remained above 45 for 32 days and then they started to tape it down in accordance to the half-life. It’s not that these drugs take time to actually release into your system when you take them is that these drugs take time to have an effect and build up in your system. In the thing you’ve got to remember if a drug contains an ester and in this case of Enanthate then the proportion of that weight of that drug is taken up by the ester. So in fact of a 100 mg testosterone enanthate, you’re only actually getting 17 mg of the hormone, and the 30mg is taken up by the ester and its birth bearing that in mind. A lot of people using Enanthate will say I only need injecting once a week. Now if you want to keep good plasma levels as stable as possible I actually recommend you injecting as frequently as possible.

How often to inject Test Enanthate and why?

Obviously, we got a spike that we’ve got to consider. So I generally would recommend Test Enanthate to inject every other day. And basically, all you do is minimize your dose. As an example let’s say you’re taking 500 mg and testosterone enanthate which you have comes at 250 mg per ml. So instead of taking 2ml in one day or 1 ml 2 times a week, you can take half ml four times per week.

There are several benefits.

The frequent injection you’ve got highlights of something going wrong. But it will create better blood plasma levels. It will lessen side effects particularly still flight just feeling rundown or feeling tired, and appetite suppression is a lot milder when you space your injections out.

There is one thing that needs to be bear in mind with Enanthate. Testosterone Enanthate uses Enanthic acid in its ester and test Cypionate uses Cypionic acid in its ester. Cypionic is a little bit milder and as a result, enanthate can be more irritant to people than a Cyp which is why some people say test enanthate is easier to take. Because otherwise, the two products are very similar both in half-life and everything else. The main difference between these two esters is not the length of the period but in the acids uses carriers for the ester.

Why does this spike occur?

An ester surrounds the hormone molecule and you see in the way of enzymes within the body by determining the rate. That’s how we get the half-life. Unfortunately, there are always variations with individuals and some people may have slightly more enzymes than others and slightly less. This is why when you do TRT with a doctor they start to set protocol and they test you and adapt the protocol to suit you as an individual.

However, this can be physically removed. And the physical action of injecting this drug will remove some of the esters. It will cleave it as a result that’s why you get this spike.

Side effects of  Testosterone Enanthate Injections

Enathate converts very easily to estradiol as any other testosterone. So you gonna need AI support in most cases. I wouldn’t overly suppress estrogen would be very careful cos estrogen has a lot of benefits for the body. But you will have to manage that. Ideally, you need to test after being on a cycle for about four weeks then the problem is if you will choose a SERM it only blocks receptors so testing is not gonna give you an indication as to what your actual estrogen levels are in regards to how it’s affecting you. Why an AI or suicide inhibitor which is my preferred choice like Aromasin will give you not only protection, you won’t get rebound because you are not suppressing aromatize and when you test you’ve got an accurate reading of what your estrogen levels are.

It’s worth bearing in mind that testosterone converts to the DHT. This is done by a 5-alpha reductase enzyme. There is still hair loss and other sides from DHT. You gonna get them. You can run something like finasteride which will reduce the 5-alpha enzyme and as a result reduce conversion but you will also reduce the potency of the drug. To be fair it’s just one of those things if you’re pretty determined to lose your hair from a drug issue, accept it and shave it off.

With all steroids, we’ve got lipid manipulation.

Testosterone Enanthate was used at the dosage of 280 mg a week and it showed no effect on the lipid values. However, when an AI was added to the tests it showed a 25% drop in HDL. This is worth bearing in mind Aromatase Inhibitor affects your cholesterol levels a lot as well. When doses of Testosterone Enanthate were up to 600 mg with no AI it showed a 21% drop. So AI is still harsh on lipids and you need to bear in mind that when you’re building your protocol.

Usual problems with lipids management if you don’t control it, applied levels can start to build, and as a result long-term you can have narrowing of the arteries and this can lead to heart disease and all kinds of that problems. Keep an eye on your cholesterol levels.

Testosterone Enanthate is not liver toxic. I’ve seen studies where it was used up to 3 grams of test Enanthate a week with no effect on liver values. Obviously, it is natural testosterone that suppresses. You will definitely need to look at some form of PCT. But there is nothing wrong with the testosterone-only cycle. They are perfectly fine. Obviously uses the backbone of a cycle and we add other steroids to it.