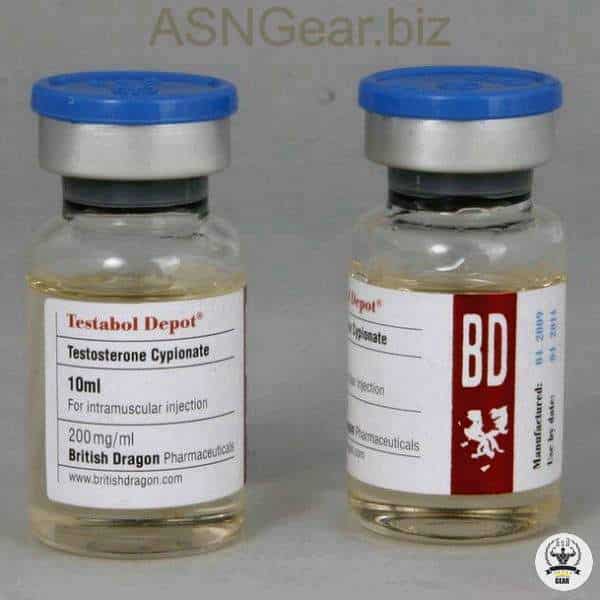 Testabol Depot is a British Dragon injection steroid with main active substance testosterone cypionate. British Dragon testosterone cypionate is considered the longest ester of testosterone. Testosterone Cypionate increases muscle mass and strength indicators. The half-life of Testabol Depot 200 is 14 days from the moment it enters the bloodstream. The elimination half-life is 6-8 days. Due to the long period of activity, the steroid can cause noticeable water retention, so usually, it is combined with other steroids.

The anabolic and androgenic index is 100% of testosterone. British Dragon Testosterone cypionate acts through anabolic receptors, increasing their ability of nitrogen accumulation, which comes as a fundament in building muscles. A positive nitrogen balance provides intensive growth of muscle tissue and slows down the process of its destruction.

Most often, it is used in such sports as bodybuilding, powerlifting, weightlifting, and other sports.

Depending on the goals testabol depot 200 cycles can be 6-12 weeks. If the cycle duration is longer than 10 weeks, then it will be necessary to use gonadotropin in the middle of the cycle and at the end as well. Injections are given twice a week, sometimes less or more often, depends on the athlete’s experience.

The optimal dosage is 250-500 ml per week and if you want to gain enough muscle mass the dosage should be 500ml and up to 1g. The optimal dosage depends on individual indicators’ performance and the athlete’s experience. Testabol Depot is not recommended for female athletes. Very often, Testabol Depot 200 is combined with nandrolone. Aromatase Inhibitors are more preferred to be used on cycle than antiestrogens. It can be Aromasin or Arimidex (Anastrozole). If you decided to go with antiestrogens then Proviron or Tamoxifen can be used. Post Cycle Therapy is necessary at the end of the cycle.

Testabol Depot 200 is prone to aromatization, which leads to an excess of estrogen, which can develop gynecomastia. To avoid this, you need to take Nolvadex or Clomid. Most often, aromatase inhibitors are used, which minimize these kinds of side effects. Sometimes Depot testabol causes increased body hair growth, baldness, acne, oily skin, and increased blood pressure.

Reviews about the steroid are mostly positive. Many athletes appreciate it for the ability to gain muscle mass and not frequent injections. After the substance is injected into the muscle tissue, it is stored in the fat depot and gradually enters the bloodstream. Despite the fact that there is a rollback phenomenon, still, most of the muscle mass remains with you after the cycle.

Before you buy Testabol Depot, you should consult with a specialist. It is prone to aromatization; so dosages and antiestrogens must be used properly as recommended. The substance acts through anabolic receptors, which leads to the accumulation of nitrogen, which performs as the main material for muscle protein growth. During the administration, rapid hydration of the cells is noticed, the muscles acquire a more beautiful shape, but also a significant rollback is present. It is all because a significant part of the weight consists of water.