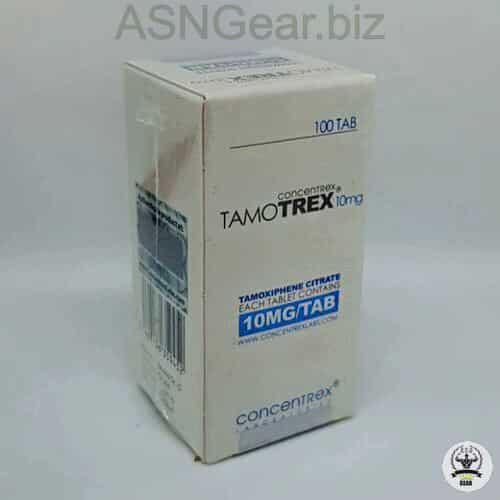 Tamotrex 10mg is a brand name from Belgium lab Concentrex which stands for Tamoxifen Citrate. In medicine, Tamoxifen is usually used to treat breast cancer. In bodybuilding, Tamotrex is used on cycle to avoid any gyno appearance and is include in Post Cycle Therapy after your cycle. Tamoxifen Citrate coming as a tablet. Each tablet contains 10mg of active substance Tamoxifen. It belongs to SERM (selective estrogen receptor modulator). Tamoxifen Citrate is blocking estrogen which is a female hormone and occurs in big quantities from testosterone conversion. If you are gyno prone then it is necessary to use an Aromatase Inhibitor or Nolvadex Citrate while on cycle. Proper PCT protocol should consist of Nolvadex as well as Clomid and in some cases HCG or test boosters. First, it will help you to reboot your system which was off while you were on a cycle, and second, it will help you to save your gains. On PCT Tamoxifen Citrate should be used full month. You can start with 40mg and then come down to 20mg daily. Or you can use it straight 20mg daily.

Tamoxifen is safe as an alternative as an antiestrogen than aromatase inhibitors as far as HDL cholesterol. First of all, I think it’s true. There are no studies on this. Tamoxifen is softer on the HDL. But of course, there are polypharmacy men who are on steroids, testosterone even is going lower men his HDL. And a man that has a family history of coronary disease, he’s maybe had coronary artery disease. You have to be very careful with all these drugs together. But I think it’s true Tamoxifen is a softer alternative because it definitely does not destroy the HDL panel as much as Aromatase Inhibitors.

How Tamoxifen can be used with men that are using anabolic steroids?

Number one is gynecomastia. That can be used on men that are on TRT and even suffering from steroids. The effects of this drug do block the initial phases of gynecomastia before there is a physical lump. And it’s just sensational gynecomastia that men on TRT coming off the steroids or just organic men on TRT can use Tamoxifen for a limited time period, a very limited period. Because if you do it for a week or two you’ll see that it does block those effects and then it’s a restart and sensational gynecomastia goes away. You have to be very careful not to do too many rounds of this because of the side effects and at a certain point if you have got gyno, more physical gyno you have to refer to a plastic surgery evaluation.

It this interesting that this has to be differentiated that it’s not a systemic aromatize inhibitor. You’re not gonna block aromatization with Tamoxifen Citrate systemically so don’t stay on this drug too long. It should not be used for that reason and that’s where the side effects will come.

Continuation for Rationale for Use

Tamoxifen (Nolvadex) is classically used appropriately for PCT (Post Cycle Therapy). Nolva is classically used to get the men off steroids, classically used with the dual selective estrogen receptor modulator regimen as it’s used with Clomiphene. Added to Gonadotropin and it’s definitely working. Interesting that PCT can be used as that agent that’s used with other drugs and Tamoxifen also can be used alone. Studies show that men that have been prior exposed in their central nervous systems to steroids don’t do well in the Post Period just on Clomiphene. Depression can rule it, can happen and it can be quite pronounced. It was found out that on Nolvadex men can do better by themselves as they may have anabolic hypogonadism and they don’t want to be put on esters of testosterone, they want to give themselves a chance to see if they recover. This drug again monitored closely a man can do well versus Clomiphene. They can live on this for a while, they can do rounds of this on and off because it does increase endogenous antigens on a man but it’s not as strong as Clomiphene. These drugs which we discuss here are all anecdotal although there are some research studies that are coming up. These drugs are very powerful and they’re quite old and we know they have side effects. These are complicated drugs and you need to use them under a physician’s supervision and to be monitored.