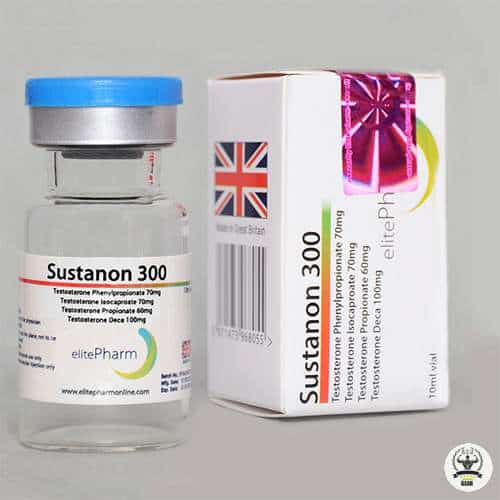 Sustanon 250 was brought to the international markets in 1970 by Organon. Later on, Organon was transferred to Schering-Plough, currently transferred to Merck. These are big pharmaceutical companies.

Remember. Organon responsible for bringing us Deca-Durabolin, Andriol (oral form of testosterone undecanoate), and also Pregnyl which is a name for HCG.

Sustanon 250 came into the market in the 1970s to offer a therapeutic advantage over the existing esters that we had for TRT. That was over testosterone propionate, cypionate, and testosterone enanthate. Let’s look a look into the details that make up Sustanon 250.

It’s four classic esters that the chemist put together back at that time.

And a total is 300 milligrams of Sustanon. Let’s think about now where do they come up with that name? Sustanon – sustainable and from Organon. Let’s go back and look at these esters independently. Why this drug is so phenomenal and so unique. They realized that Propionate is too short-acting, too many injections and at that time they realized that Enanthate and Cypionate are basically bioidentical in half-life in action. That they can do better and they would want to deliver a drug that has short-acting and intermediate-acting esters. In other words, Sustanon is a mix of esters for more steady delivery of Testosterone.

Propionate – very short-acting, need to inject it through every couple of days. Then testosterone phenylpropionate is a little bit longer-acting than the standard Propionate, adding a phenyl group. Just slightly that waxy ester tail allows it to delay a little bit. So now they’re breaking it down so it’s a little bit more delayed.

Testosterone Isocaproate – like other esters but only used in Sustanon. It’s very similar to the well-known esters Cypionate and Enanthate. So it can be injected every 2 weeks or so. Although we all know that it’s not the best way to do it and micro-dosing is better. This medicine Isocaproate is something that is really not seen in the world. Isolated but itself.

Testosterone Decanoate which is the biggest portion of this mix of esters is the classic drug. This is the longest acting ester that can be given every three weeks. This was never marketed and none of these were marketed except Testosterone Propionate in America and this was marketed as a veterinarian steroid in Mexico. Details are incredible on the chemistry of this.

Does Sustanon 300 work as intended?

There are no studies, but excellent anecdotal reports. Men swear by this drug, this is for TRT, not to mention steroid use. Users feel this drug makes them feel better in the central nervous system. It’s more bioavailable not to mention they dose this every week classicly.

Why microdosing Sustanon 300 could lead to better outcomes than microdosing Cypionate or Enanthate?

There were studies where they looked at peaks and throughs and they looked at total free testosterone. It’s quite predictable with esters the free portion of testosterone is going to be slightly higher, there’s no question. And that value and that reason alone, the man feels better, the central nervous system is stimulated on this and does feel better. The peaks and the throughs are absolutely so important and every man’s chemistry is so unique.

Whan a man injects esters of testosterone into his body it is just for delivery, the long waxy ester tail is to slow down delivery because the oil doesn’t mix, that’s what they take advantage of waxy ester tails. Enzymes liberate different esters at different rates.

In a man, there is no way to measure in a complete sense what’s really happening. So you have to look at the anecdotal scenarios. If you will just measure total free testosterone on different esters, they can be high, they can be low, they can look great but men say they feel better on this.

Sustanon 300 may provide just the right mix of esters for the same men or the right amount of change between doses.

It’s really hard to determine what’s different about these esters when you look in labs and the total testosterone and the free will be the same depending on microdosing with the standard Cypionate and Enanthate.

This is the number one TRT ester in the world.

Not available in America – Why?

Let’s go back in history. In the 1970s when Organon was marking this, Organon is a Dutch Company, not an American Company and when Sustanon 250 came into the market to improve on the current esters Propionate, Enanthate and Cypionate look at America.

Two esters were marketed in the US and I assume were selling quite well. Testosterone Enanthate and Cypionate were already being branded and sold by major U.S Companies Squib and Upjohn. Imagine Organon wants to come into America and approach America and come in the feds and go into the application process and because they feel that Sustanon 250 gonna be a great drug. It’s better than the current esters and there is a good market in America have been at that time and certainly is now. So what happened? They were pushed out. It never made it politically. So that’s really it. That happened to this drug, must happen unfortunately it’s business and money, powerful features and that’s just the truth.