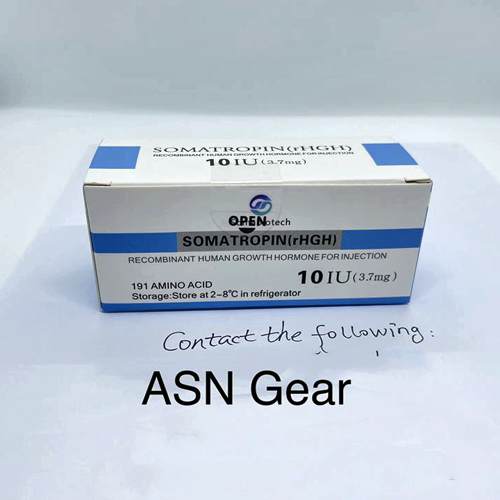 Somatropin, also known as human growth hormone (HGH), is a hormone produced by the pituitary gland in the brain. It plays a crucial role in growth and development, particularly during childhood and adolescence.

Somatropin has been synthesized and used for medical purposes since the 1980s when it was first approved by the Food and Drug Administration (FDA) for the treatment of growth hormone deficiency (GHD) in children. It is also used to treat adults with GHD and a variety of other conditions, such as Turner syndrome, Prader-Willi syndrome, and muscle-wasting diseases.

In recent years, somatropin has gained popularity among bodybuilders and athletes as a performance-enhancing drug. However, it is important to note that the use of somatropin for non-medical purposes is illegal in many countries, including the United States, and is banned by most sports organizations.

Somatropin HGH: How It Works

Somatropin works by stimulating the production of insulin-like growth factor-1 (IGF-1), a protein that promotes the growth and division of cells, particularly in bones and muscles. It also promotes the breakdown of fat, increases protein synthesis, and enhances the immune system.

Somatropin is typically administered as an injection, either subcutaneously (under the skin) or intramuscularly (into the muscle). The dosage and frequency of injections depend on the specific condition being treated and the patient’s age, weight, and height.

Somatropin has a number of potential benefits when used as a medical treatment. For children with GHD, somatropin can help to normalize growth and development, improving the height, weight, and overall physical health. It can also improve cognitive function and boost energy levels in adults with GHD.

In addition to its use in GHD, somatropin has been shown to have potential benefits in the treatment of other conditions, including:

Somatropin Bodybuilding: The Risks and Controversies

While somatropin may have potential benefits as a medical treatment, its use as a performance-enhancing drug in bodybuilding and athletics is controversial and carries a number of risks.

First and foremost, the use of somatropin for non-medical purposes is illegal in many countries, including the United States. It is also banned by most sports organizations, including the World Anti-Doping Agency (WADA).

In addition to the legal risks, the use of somatropin in bodybuilding and athletics can also have negative health consequences. Possible side effects of somatropin include:

More info about HGH you can read here.