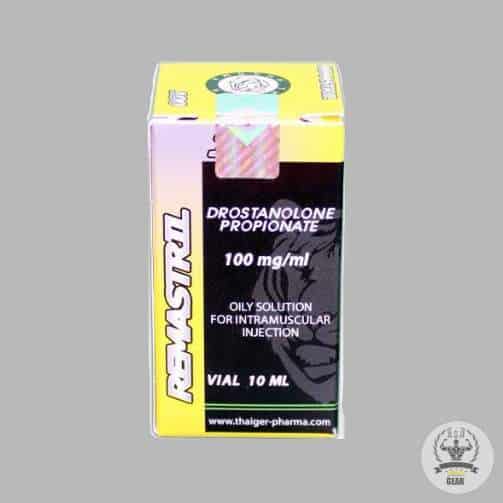 Masteron is a DHT dihydrotestosterone based steroid. And as a result, it has an anabolic ratio of 62 to 130 and androgenic 25 to 40 so you can see it’s quite mild. Especially in tension. The half-life of Masteron is 5 days so as we are going through before once you reach stable plasma your body will cycle metabolizing of this drug. The detection time is around 3 months. Doses are generally sort of 100mg and up EOD. And females can use it and we are talking about 50 mg mid mark once a 3 – 4 days.

Drostanolone has an anti-estrogenic property so it will reduce estrogen. However, this is with bearing in mind if you are running it on its own or with a very low dose of testosterone. Because it might reduce estrogen to such a point that you restrict growth. So bear that in mind that when you run Remastril that it is anti-estrogenic and you need to adjust your estrogen management controls accordingly. All the way you might find that you reduce estrogen too low and then you start getting side effects including low IGF-1, low recovery, and growth.

Very low doses of 700 mg have hardly any effect on your hypothalamus-pituitary-gonadal axis. But if your system is already shut down from using anabolics don’t think that you can just drop on Masteron and your system will recover. No, if you are shut down, obviously will recover after some time but Remastril is still slightly suppressive and you will not recover while running Masteron in the background.

Remastril is a very mild steroid and the gains are low but dry gains. You don’t need to have a low body fat level for this stuff to be effective because its gains are not dramatic and because there is no water retention. Generally speaking, you will not gonna see big changes in your physique but if you already are leaner then the changes gonna be more obvious. It doesn’t have that effect on lipid-like all steroids but since it’s a mild steroid lipid issues will be lower. It doesn’t have any impact on the liver or the kidneys. It is suppressive in doses. So using Masteron starting from 400mg is already becoming suppressive. More commonly issues with 600 mg so it will require PCT but you won’t gonna be overly aggressive with this stuff.