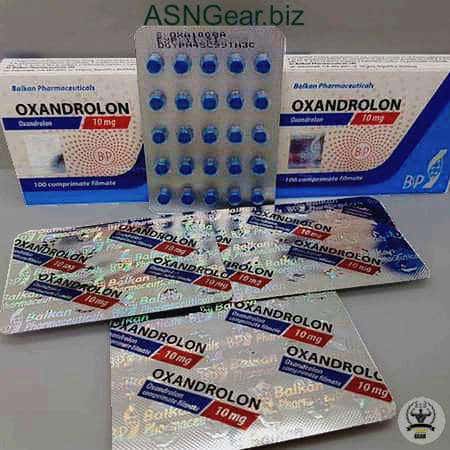 What is Oxandrolone Balkan and what does it do?

We shall explain what Oxandrolone Balkan is in this post, along with its uses and side effects. Dihydrotestosterone (DHT) androgenic anabolic steroid Oxandrolone is used extensively and has modest anabolic characteristics. While Oxandrolone, also known as Anavar, is an oral steroid and, like the majority of orals, a C17 α-alkylated substance (17-aa), it differs from other members of this family of steroids in that it has relatively little liver toxicity. Anavar has a fairly small liver burden compared to most 17-aa drugs, therefore you won’t notice much of a rise in your liver enzyme levels. And for this reason, those who prefer tablets attempt to get Oxandrolone Balkan Pharmaceuticals instead of other comparable oral steroids.

The basics of general Oxandrolone review can be the following:

The moderate anabolic steroid Oxandrolon Balkan is not recommended for bulking. With regards to performance-enhancing, Anavar Balkan Pharma will not cause you to gain a lot of lean muscle mass. However, the muscles that are created will be of the highest possible grade. The preservation of muscles and increased metabolic activity are the main advantages of Oxandrolone. When used in conjunction with a calorie-restricted diet, Anavar not only helps you lose body fat but also keeps your muscle mass intact. Athletes training for contests can use Anavar. Also using it are those who want to seem thin and attractive. Anavar is sometimes referred to as a “ladies’ steroid” because of its lightness and few effects. This is not the finest option for a man searching for a potent steroid. However, it could be the ideal supply for a carefully thought-out reducing cycle. Oxandrolone Balkan Pharmaceuticals is one of the most widely used steroids that can be purchased online, which supports its usefulness.

The most significant benefits of Anavar tablets are:

Let’s take a more detailed look at each of these benefits.

1. Increased Strength: One of the most common effects of taking Oxandrolon Balkan is increased strength. This steroid can help you lift heavier weights and train harder for longer periods of time. If you’re looking to increase your strength, then Anavar is a great option.

4. Protection of Lean Body Mass: One other advantage of consuming Oxandrolon from Balkan Pharmaceuticals is the protection of lean body mass. Because of this your body will be better able to preserve muscle mass when following a calorie-restricted diet or during periods of intense training. If you’re attempting to protect your lean body mass, then Anavar tablets is an excellent choice.

The Potential Side Effects of Using Oxandrolone Balkan Pharmaceuticals

Oxandrolone Balkan has the potential to have certain negative effects, much like the majority of anabolic steroids. Anavar tablets do not result in gynecomastia, which is a side effect of the aromatization of androgens to estrogens, which is a side effect of many anabolic steroids. In terms of suppressing the synthesis of endogenous testosterone, Anavar is also extremely mild. Although there will be some suppression, the degree will remain primarily rely on the dosage of Balkan Oxandrolon.

Among the possible unwanted side effects of using Oxandrolone should be mentioned:

Let’s examine some of these probable negative consequences in greater depth.

1. Acne: One potential side effect of taking Balkan Pharmaceutical steroid pills is acne. Acne occurs when the pores on your skin become blocked with oil or dead skin cells, which can lead to inflammation and infection. If you’re susceptible to acne or if you have a history of acne, then you should avoid using this steroid as it could worsen your condition.

2. Hair Loss: Another potential side effect of taking Oxandrolone Balkan is hair loss. While hair loss is not guaranteed, it is possible that this steroid could accelerate the rate at which you lose hair if you’re predisposed to male pattern baldness or other forms of hair loss. If you’re concerned about hair loss, then you may want to avoid using this steroid.

3. Deepening Voice (In Women): Some other possible negative effect of using Anavar from Balkan is deepening voice (in women). This side effect occurs because this steroid can increase the level of testosterone in the body, which can lead to masculinization in women who take high doses for extended periods. If you don’t want your voice to deepen, thus you may want to refrain from utilizing this drug or only use it for short cycles at low doses.

Oxandrolone from Pharmaceutical Company Balkan is a pretty mild steroid, therefore bodybuilders will need to take a lot of it to get any notable results. Most men should take 80 mg of Anavar (Oxandrolone) every day at the very least if they want to see any noticeable and favorable benefits. A lower Oxandrolone Dosage should be used on women since they are more susceptible to anabolic steroids. Low dosages also guarantee that there will be no negative effects at all. For the majority of women, 10 mg per day will be almost ideal.

More info about Oxandrolone can be found here.