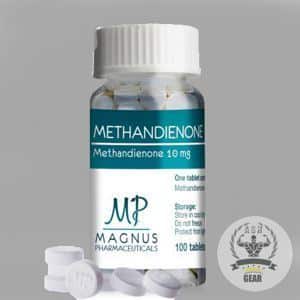 Before starting the Dianabol Cycle sportsmen should keep in mind that the body can get a tolerance to the Danabol steroid and you might not get the desired result. Therefore, probably the most important rule is gradually to top up the dosage of the steroid. It’s also recommended to take the tablets at 6 a.m – 9 a.m and 6 p.m – 9 p.m. This is because the blood level of testosterone has the highest level at that time.

During the Dianabol 10mg cycle, you can divide tablets by taking from 2 to 4 times daily. This is quite a common technique among bodybuilders.

The initial phase of the cycle is approximately 3-4 weeks. As a rule, such Dianabol Steroids Cycle is used by beginners or athletes, who for some reason didn’t train for a long time (due to injury). The average methandienone cycle is from 8 to 12 weeks. If you do just a solo cycle then it can reach even 16 weeks. But don’t go more than 16 weeks if you want to avoid side effects from Dianabol.

This cycle also allows you to avoid the effect of habituation of the organism. Since the Dbol Tablets increases appetite, it’s better to take the methandienone tablets before a meal – this will allow you to consume a larger amount of protein (which is in principle). The food that comes to your body after ingestion of the pill, will serve as a source of energy and, above all, for the building blocks of muscle.

In the view of the famous American bodybuilder Lee Haney, he said that Dbol has a significant impact on the growth and strength of the trained athlete, makes higher energy levels, and has a positive effect on the overall physical condition of an individual.

Methandienone was originally a developer in 1955 by CIBA and first came to Germany and USA markets. As the product of CIBA its oral form became the common and widely used AAS among newbie and professional athletes.

Let’s review what Dianabol is doing to your body during the cycle. Basically, methandienone provides you with better protein synthesis. It makes the muscle cells have a faster and easier time of building blocks. Also as one of the good benefits Dianabol helps you to hold nitrogen at a high level in your body.

Dianabol tablets are usually used on the mass gaining cycles.

Usually, the average dosage starts from 30mg daily for beginners and goes up to 80mg or even 100mg daily for advanced or professional users. While you rise up your Dianabol dosage you should keep in mind that it’s still a quite powerful steroid and you should do it slowly in small quantities. Don’t forget to keep an eye on the side effects. In case if they start to appear you should stop with your current amount of Dianabol steroid and decrease the dose. After the Dianabol cycle makes sure to take proper PCT and to recover your liver. Like any other steroid tablets, Dianabol is toxic to your liver. During the cycle as after it, you should also take any liver protectors such as LIV 52 or similar.