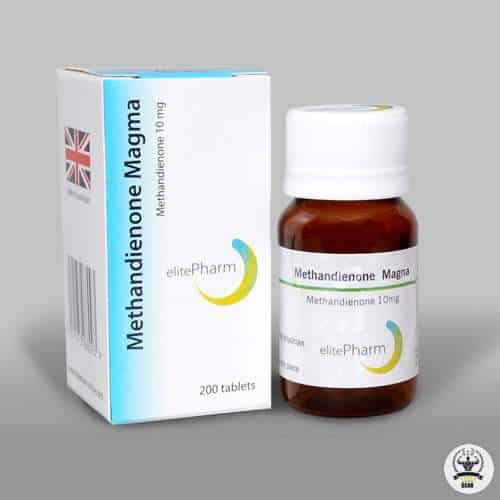 Methandienone from ElitePharm is a popular anabolic steroid that contains strong anabolic and androgenic properties. It is made in a better form of tablets, which allows the active substance to be faster absorbed in the bloodstream and work quickly. Dianabol 10mg is the most affordable and most selling anabolic worldwide, thousands of athletes use this steroid to rapidly increase muscle mass and strength performance. The steroid is extremely effective at an actual low price.

The story of Methandienone begins in 1956 when Dr. John Ziegler synthesizes it from the molecular form of dihydrotestosterone. It was made for the treatment of breast cancer in women, and for the faster recovery after serious operations and burns. At that time, the American pharmaceutical company Ciba promoted Ziegler’s ideas and 4 years later began the first production of the active substance Methandienone under the brand name Dianabol. The steroid rapidly spreads over the market and after some time the athletes become interested in Dianabol tablets and medicine falls to the second plan. You can buy Dianabol tablets on our website asngear.co. If you have already decided to buy methandienone in the
In the USA, then this will really be the right decision if your goal is to gain as much weight as possible.

What effect to expect from buying Dianabol 10mg?

Almost any bulking cycle cannot be imagined without Methandienone. This is due to the fact that it’s an extremely effective steroid, it successfully works both as a solo cycle and in combination with other AAS. During the Dianabol course, a beginner and intermediate level athlete can gain up to 12 kg of muscle mass. The power and strength indicators regularly increase by 20-25%, meanwhile, if you do not exceed the recommended dosage, side effects will not occur will be minimal. You will gain massive and strong muscles in a quite short period of time, and you won’t lose your muscles immediately after the course, only water will go, which is about 3 – 4 kg of the overall weight.

The steroid is not recommended for men below 21 years old! Advised dosage varies between 20 – 50 mg per day. The daily dose is better to split into two or three equal, half in the morning and a half in the evening, in order to provide equal background hormone levels of the active substance in the blood. Dianabol tablets are a bit toxic to the liver, therefore it is recommended to take them after a meal. It is good to know that taking tablets before the meal, is one step more effective than after. It’s better to start with the minimum dosage and gradually increase it to the desired weekly during the cycle. Cycle duration is advisable to make 8 weeks since this is the period when methandienone acts in the body after the activity drops down by the 9th week and body tolerance is developing.

At 40 mg dosage methandienone can be aromatized into estrogens, this statement of facts can lead to a number of negative effects named estrogenic side effects. The main ones are gynecomastia, water retention, there is one important notice, the greater is water retention percentage, the higher the rollback phenomenon will be. About Dianabol 10mg reviews often note that the main task is to gain more muscle mass than water, for this, it is very important to make proper PCT.

Other possible side effects of Dianabol tablets:

In order to reduce the risk of such problems, it is recommended to take appropriate drugs, ranging from aromatase inhibitors – Aromasin and Anastrozole, to testosterone stimulants – Gonadotropin and Tribulus. To maintain liver health, take Carsil Forte. In addition, medicine that is used on PCT is actively involved in the process of reducing the rollback phenomenon.

More about Dianabol tablets you will find here.