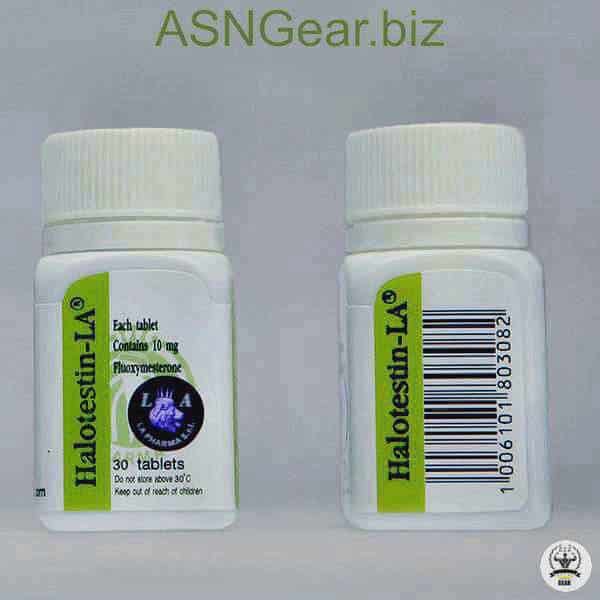 Halotestin (fluoxymesterone) is an androgenic anabolic steroid. It comes only in oral form. Halo is used to develop aggression, make muscles tougher, and increase strength without gaining weight. Fluoxymesterone is used in such sports where athletes need to keep the same weight category and where endurance is a key factor. The exact way how do fluoxymesterone steroid works scientists till nowadays didn’t find out. Present days the main version presumes a non-receptor effect.

This steroid is the most powerful tablet anabolic!

In medicine, the fluoxymesterone steroid was used in the treatment of delayed puberty, male hypogonadism, and breast cancer in women. Nowadays Halotestin is not used in medicine anymore.

By chemical structure, Halotestin has a lot in common with methyltestosterone but is five times more powerful than the last.

Fluoxymesterone is testosterone but chemically modified in three positions.

How to take Halotestin (La Pharma)

Fluoxymesterone is rarely included in the cycle. Most often, Halotestin is used directly before the competition. Fluoxymesterone’s optimal dosage is 10 mg daily. The maximum allowed dosage is 20 mg. It is recommended to use Halotestin for a short-term period just to increase aggression and speed-power performance.

Regarding Fluoxymesterone in combination with other steroids, it practically has no advantages. It is prohibited for female athletes to use halo.

Considering the high formation of dihydrotestosterone, Fluoxymesterone’s side effects are adenoma and hyperplasia of the prostate, an increased chance of cancer. Halotestin steroid is very powerful and toxic to the liver. Experimental studies have shown that Fluoxymesterone is 19 times stronger as anabolic and 8.5 stronger as androgen than testosterone. It is better to use steroids after passing all medical tests and consulting with your trainer.

Reviews of all athletes taking the steroid were that Fluoxymesterone is toxic to the liver. Such reviews are confirmed by scientific studies that have revealed active processes of liver cell degradation during the cycle.

As for the increase in strength indicators, increase in muscle hardness and relief, as well as the increase in aggression, here the reviews about Halotestin, are positive. All athletes felt a pronounced effect.

More about Halotestin you can find here.