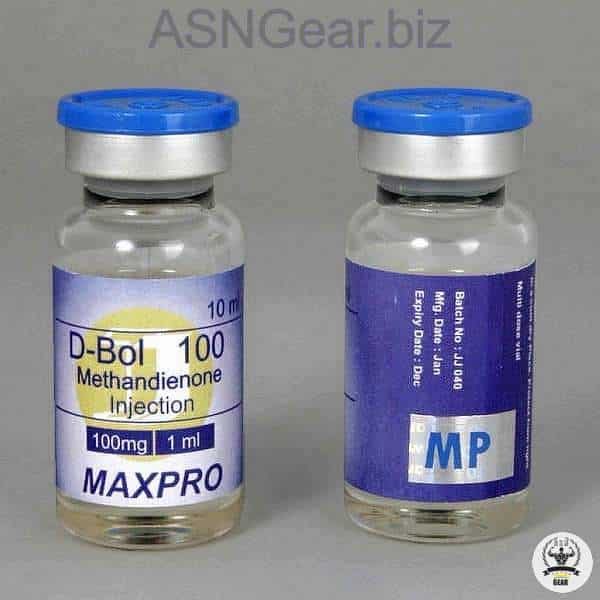 MaxPro Dbol liquid 100 is an anabolic and androgenic steroid from a Chinese pharmaceutical company. The main active ingredient is methandienone. The steroid was created in the 60s in America. The first company which started to produce Dbol was Ciba. In the beginning, the main goal of the Dbol manufacture was strictly for medical purposes, such as the treatment of burns, increased tone in women, and accelerated recovery processes in the body.

Later, liquid Dbol began to be used by athletes to build muscle and increase strength, despite the FDA ban. The dbol liquid form does not belong to the group of the most dangerous AAS, although today there is active propaganda of its harmfulness. I would say that the toxic effect of methandienone is exaggerated and its anabolism is underestimated.

Taking into consideration the phenomenon of Dbol rollback (which, by the way, can be minimized with a correctly planned injection cycle), the liquid form of Dbol will allow you to gain 8 kg of muscle mass. Liquid Dianabol demonstrates insignificant estrogen activity and its effect on the liver is quite moderate. Oral methandienone half-life is 6-8 hours. On the doping control and can be detected up to three months. For professional athletes more preferable will be liquid form.

How to use liquid form?

Dbol injection cycle is recommended for experienced athletes to increase muscle mass and strength performance. The classic form of steroid is an oral version, while the injectable one has practically no analogs. The maximum safe daily dosage is 50 milligrams. In this case, it is advisable to take Dbol 3 times: this avoids sudden jumps in the hormonal background. It is better to start the tablet cycle with a minimum dosage (30 milligrams), gradually increasing it up to the optimal one. The maximum recommended duration of the injection cycle is 10 weeks. While on cycle it is necessary to use aromatase inhibitors (for example, Arimidex), and at the end of the cycle to continue PCT with Nolvadex.

As for how to take Dbol in the liquid form of injections, actually, you can follow the same scheme as for the oral version. During the cycle, there is a possibility of blood pressure. In this case, it is recommended to use antihypertensive drugs (for example, enalapril, with a dosage of 5 milligrams). To improve the mass gain Dianabol can be taken together with Trenbolone, Sustanon, Testosterone, Nandrolone.

If you will ignore the use of aromatase inhibitors, it’s possible to catch gynecomastia on the cycle. Dianabol converts to methyl estradiol that has a third greater affinity for estrogen receptors. In fact, Dbol has a moderate impact on the liver, especially in injection form. The most common and almost indivertible consequence of taking Dianabol is water retention, which leads to a significant rollback of the gained weight at the end of the course (can reach up to 50%). Side effects from methandienone might occur such as acne, fast increase, and decrease in sexual desire (before and after the cycle, respectively), boldness, masculinization (in women).

Negative reviews of liquid Dbol form from MaxPro in most cases are caused by a significant rollback of the gained mass. It must be noted that it is really impossible to completely save weight, but with the correct post cycle therapy and nutrition support, it is quite realistic to minimize losses. There is a positive discussion about the low frequency of side effects, the quality of the injectable form of the drug, and the affordable price.

Here you can find more about Dbol.