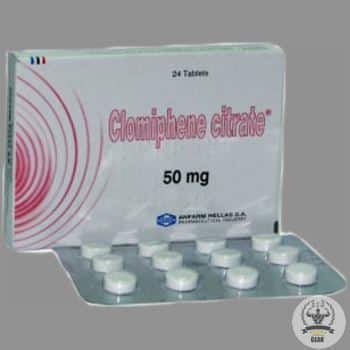 Clomiphene also is known as Clomid. It was developed in 1956 and began early pharmaceutical trials in the early 60s for women with ovulation issues to help them conceive. In the mid-60s Clomid started to be used for male infertility. For men, it was found to increase luteinizing hormone and follicle-stimulating hormone and to increase sperm count. Clomid become very quickly the most commonly prescribed infertility drug in the world. And only for the past 10 years, Clomiphene has been used more for TRT for men.

Clomid is also a classic Serm.

Clomid from Anfarm Hellas. Anfarm is a European Pharmaceutical Manufacturer. The company was established back in 1967 in Greece. Today it’s a pharmaceutical giant selling high-quality pharmaceutical products worldwide.

Female infertility and it only really works for men for that purpose if the failure is in the hypothalamus or the pituitary not if it’s in the actual gonads itself.

When you will look at the anabolic steroid failure it’s not the balls but it’s part of the balls. It’s hypogonadotropic hypogonadism. So it’s something that happens in the brain from steroid use and the brain goes to sleep and it doesn’t wake up. If FSH and even Clomid and Tamoxifen and these drugs and there are not many drugs we use, we don’t have many tools in the bag it does work. It doesn’t work well for the brain of a man who is using steroids but again it does. The balls still have to be functional. There has to be some salvation of the balls.

Most bodybuilders use it for PCT purposes. But they never use it alone.

Clomid is used for TRT. It’s used mainly these days in the bodybuilding world for PCT but typically not alone. Clomid is usually used with HCG along with Tamoxifen. These 3 drugs are classically stacked together these days for PCT. And there is a sense to use physiologically, chemically these three together.

Clomid in PCT is typically only used for a very limited time. Typically 30 days because it eventually raises your estrogen. Clomid raises estrogen systemically.

People who take Clomid report blurry vision, flashes. This medicine is working in the central nervous system. In CNS there is a phallic nerve. It’s a cranial nerve. And when you take Clomid you’re monkeying with estrogen and androgen. There are arteries that are very sensitive in the retina. So the Clomid effect in that way the vision.