General Review of The Best Anabolic Steroids for Women

IMPORTANT! The use of AAS by women requires stricter monitoring of health indicators and serious theoretical training. Otherwise, you run the risk of encountering unpleasant and frightening conditions.

Steroids with a high androgen index are highly not recommended for women whose goals have nothing to do with professional sports (female bodybuilding).

It must be understood that even if a woman creates conditions in her hormonal system that will correspond to those in the male body, many times exceeding the level of normal Testosterone, she will not turn into a “pumped man.”

To do this, you need to spend a lot of time and effort. It will also require emotional restructuring and the adoption of some irreversible measures.

Women need to understand one simple thing for themselves. If you use drugs for some achievements in fitness, in body fitness, that is, where you do not need huge investments in yourself, in terms of pharmacology, then it will be enough for you the steroids that have a low androgenic index, against the background of a high anabolic index. This is a fairly small amount of drugs. All of them are not cheap and it will be quite difficult for you to use them on an ongoing basis, so during the course, some drugs will be replaced by others, pauses after achieving results and so on. 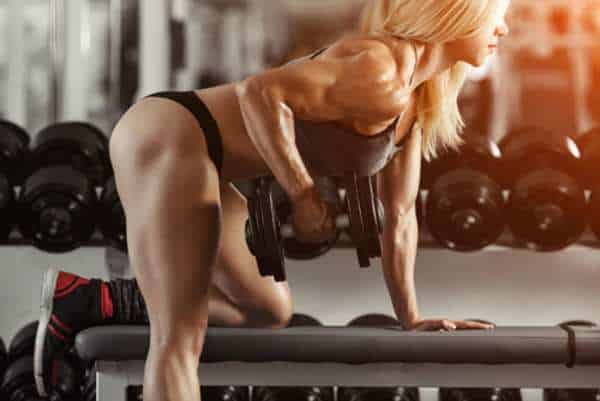 Anabolic index is metabolic. Steroids with a high anabolic index contribute to the renewal of tissues (including men), the restoration of tissue elements, and muscle growth.

What steroids can be used by women

The use of tablets can also lead to virilization phenomena (a manifestation of male characteristics in the female body), have an effect on the monthly cycle (painful menstruation, a change in their intensity, lack of ovulation and menstruation in general), and also has a standard list of negative effects:

Most people do not really see the point in its use, but given its low androgenic index, the drug has proven itself and is used in courses up to 1.5 months.

Boldenone must be handled very carefully, since it has a “bad” property, it can lower estradiol levels. Against this background, women may experience certain malfunctions in the body. In this regard, the drug is quite complex but effective. Sometimes, to achieve certain goals, this is justified.

To this list, though with a very big stretch, you can add Testosterone Propionate. But this is only in very extreme cases since we know that this is a male hormone and it can have certain side effects on the female body.

The female body is designed so that any fluctuations in the level of Testosterone in the blood can trigger a cycle of irreversible changes. When jumps in Testosterone levels are caused by internal malfunctions, the development of virilization phenomena is slower and can be controlled.

But when Testosterone is stimulated from the outside – within 1 – 2 weeks of its intake, the first serious failures are already possible: coarsening of the voice, changes in the psyche and perception, acne, amenorrhea, anovulation, etc.

As you know, in the body of women, Testosterone is present, but in very small quantities. It is responsible for almost all processes in the body. But with its excess, the same happens in the female body as in the male body – its conversion to estradiol. Therefore, a variety of side effects can occur, starting with a shift in the monthly cycles, until their complete cessation. When taking androgenic drugs, in long cycles, you have a monthly delay of 3 months or more, it’s worth considering whether this is the path to infertility? You may have a “zero” hormonal system, without the accompanying elements inherent in a woman. This situation happens quite often.

In the presence of concomitant health problems, the development of side effects has a higher chance.

The presence of inflammation caused either by a disturbance of the flora or by an STI or papillomavirus before the start of the course is a factor in the development of the risk of endometriosis, anovulation, Stein-Leventhal syndrome (polycystic), inflammation of the ovaries (most often with Testosterone esters).

It is noticed that when taking Testosterone Propionate, in women, for up to six months, it does not cause serious disorders in the body. After PCT, pregnancy proceeds normally, but this is provided that before the start of the course, the woman was healthy. 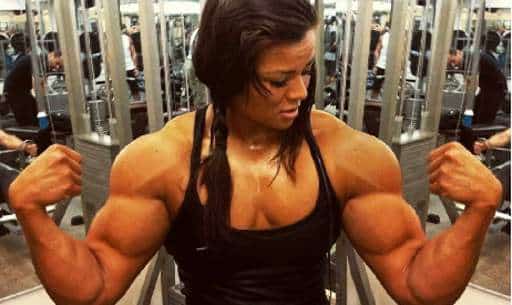 They are standard for androgens and do not stand out for anything remarkable.

Decreased voice timbre is an androgenic manifestation during the steroid cycle. May occur as a result of the use of Testosterone or from the use of large doses of anabolic drugs.

Not amenable to adjustment.

The appearance of hair – their growth in places not characteristic of a woman (by male type). More often – the appearance of a mustache, hair on the shoulders, and in the collar area. After the end of the course – passes.

Clitomegaly is an irreversible change. It arises as a result of taking androgenic drugs for a long time (usually from 2 years or more).

It is caused by a hormonal background, which can mimic puberty in boys. Since the clitoris is an unformed penis, such a significant increase in the concentration of Testosterone triggers the processes of its formation.

Although this can be considered a less serious side effect since plastic surgery today copes well with such problems. This is for those women who decide to devote their lives to professional sports. This does not apply to fitness or losing weight since in this case you have to “sit” on androgens for more than one year. This applies purely to professional sports. This is what you can see on TV or the Internet (various championships of female bodybuilding).

Even the use of low androgenic substances can cause a change in body odor. Sweat and urine may have a sharper, more pronounced odor. Excessive sweating appears. Sweat may become yellowish.

The psychoemotional state can change significantly (both for better and for worse). A woman begins to act like a teenager 17-18 years old. Frequent changes in mood, emotions, touchiness, and other manifestations. If these character traits of a woman were initially, then everything can happen exactly the opposite. She can become calm, balanced, etc.

The growth of the nasal septum, wide cheekbones – this is another case. To do this, you need to take too many steroids for too long.

Although there have been cases when from Primobolan, the voice sat 3-4 weeks after the start of the admission. And this happens only with Primobolan.

There are fairly serious studies at the University of California, whether the use of exogenous Testosterone directly affects the development of breast cancer in women. Its essence is that under the influence of reductase, it is converted to estradiol, and estradiol in high quantities, supposedly can provoke breast cancer.

Yes, in most cases, breast cancer is estrogen-dependent cancer, which in some cases is rather well controlled by Tamoxifen, but this was not proved by the example of absolutely healthy ones using Testosterone. There is no direct link between breast cancer and the use of hormones. Not a single institute or study has confirmed this. Yes, these studies have not been conducted too actively. 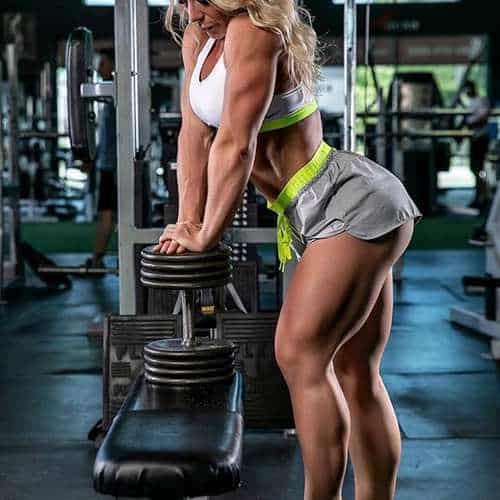 An increase in estradiol levels in the body can aggravate the course of existing breast cancer. It is extremely difficult to provoke it primarily using exogenous Testosterone, because only an insignificant part of it is converted to estradiol, the rest of it is bound by albumin, globulin and is converted to dihydrotestosterone.

Thus, to real harm in this situation, the dosage of Testosterone should exceed 500 – 700 mg per week, which is unacceptable for women.

After the steroid cycle is canceled, a drop in the level of serotonin and dopamine occurs (during the course there is an increase). Having passed the stage of hormonal recovery – these indicators also return to normal, returning us to the usual perception of the world and ourselves.

As for the second myth – this is a change in the psychological type and on an ongoing basis. It is believed that if a woman took pharmacology, then after discontinuation of the drug, she can behave completely differently.

This is not the case. The same situation can be observed in men. While on the course, you feel a surge in power, an increase in strength, your body is full of energy and it seems to you that you can do everything, and when the course is over, you may experience a depressive state, despondency. But after a certain time, the depressive state passes, and we again feel as before, completely unchanged in character. But those memories when the woman was on the cycle, of course, will remain.

The last myth is associated with the development of a fatal mutation. Since we do not have direct evidence of the effect of exogenous Testosterone on chromosomes, respectively, on DNA, we cannot in any way pass these defects by inheritance. This can only be possible if DNA breakdowns were initially present.

The impact on the XX chromosome, a purely female one, is generally very difficult to overestimate. The female chromosome with a set of DNA has a backup copy, it is a double X chromosome. Damage to one helix in the X chromosome is compensated by the presence of the second. Therefore, women, as a rule, live longer, have a more perfect immune system, it is easier for them to recover after certain stresses, etc.

In this case, there is not even an effect on the chromosomes. But, even if we theoretically assume that hormones could influence this, then we can then assume as a version that, in this case, a backup copy of the second X chromosome could well cover these defects and the fetus would be completely is healthy.

It is impossible to inherit what did not fall into the genetic code and did not change it. Even genetic mutations that occur with age, only by 2 – 5% increase the risk of developing such in the fetus (late pregnancy, conception).

In no way, temporary changes in hormone levels do not affect DNA. 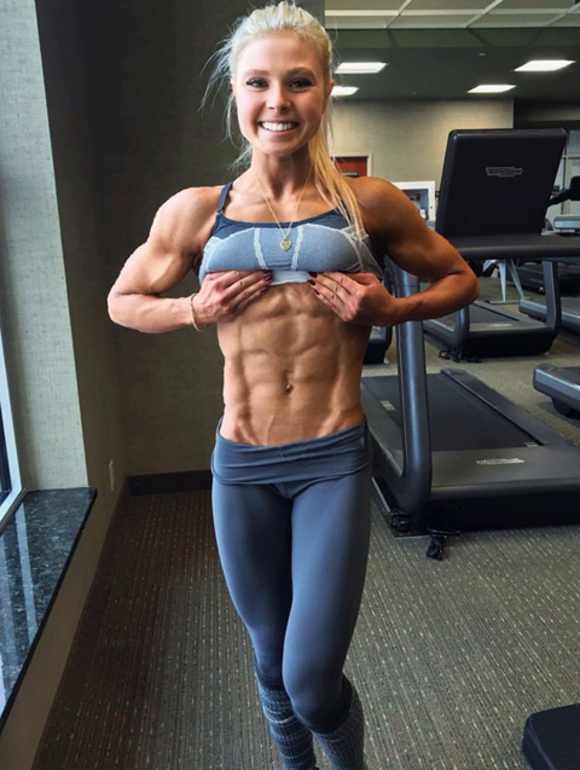 What analysis should be taken before the steroid Cycle:

Estradiol (the main indicator before the start of the course);

General testosterone (the likelihood of side effects);

LH and FSH (give up after ovulation);

AST, ALT, bilirubin, ferritin, glucose (give up on any day, on an empty stomach).

Additionally, on the course, you can take progesterone – so that you would be able to observe the ovulatory phase (if it has disappeared).

This is especially true for those women who engage in amateur activity and it is quite difficult for them to stop on their own. It is important to remember about health.

First of all, you need to decide why you need it, to achieve what goals? Our opinion is that women’s use of steroid drugs on the scales that are imposed in various federations, by various Internet resources, etc., is simply not needed. For some sort of “drying up”, it is enough to use the steroids like Clenbuterol, Ephedrine, or Ephedrine as part of direct nutrition – it will be quite enough. Why use the classic steroids cycles of Testosterone Propionate, Oxandrolone, after which a whole range of side effects are possible and not such a high-performance result.

Although many use it to increase their libido. This is already a medical practice when Testosterone preparations are prescribed to treat any psychosexual problems. But this is no longer our case and we will not consider it here.

There are other bundles of drugs that are used by women. We will consider them in the next article.

In conclusion, I would like to once again say that some global problems, from taking moderate doses of steroid drugs in women as a result of various studies, were not noticed. In this case, it is important to know the initial indicator of any problems, since many ignore them, but this can not be done.