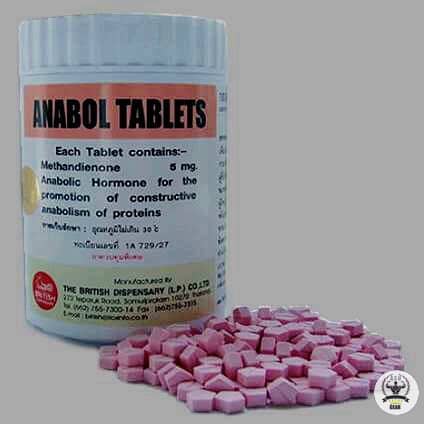 Anabol (Dianabol) is an anabolic steroid, produced by Thai company British Dispensary Co. Ltd. The steroid comes in tablets. Each Anabol tabs has 5 mg of active substance Methandrostenolone (Methandienone). Dianabol increases strength and muscle mass. For the first time, this Anabol 5 appeared later than the well-known methandienone and also quickly gained wide popularity among athletes. Dianabol tabs were specifically created for weight gain and are very popular among athletes who are not limited to the weight category. In addition, the steroid has other effects that are very useful for athletes.

Anabol tabs badly stabilize androgen receptors. British Dispensary steroid stimulates protein synthesis, promoting the growth of muscle mass. As a result of Dianabol use nitrogen is retained in the muscles. Which is the main anabolic factor?

Dianabol also increases glycogenolysis – the recovery of glycogen stores, which is spent during a workout. The activity of cortisol decreases while you are taking Anabol tabs thereby preventing the destruction of skeletal muscle fiber after training. The active substance Methandrostenolone conduce to a dopamine increase which allows you to get rid of excess subcutaneous fat.

British Dispensary tabs have high anabolic properties that are twice more than the level of the endogenous male hormone. At the same time, its androgenic activity is half less than testosterone has. We also note the fact that the price of methandienone in comparison with other anabolics is very acceptable.

The main action of Anabol 5mg tablets is a quick increase in muscle mass due to increased protein synthesis and glycogenolysis reaction. The steroid is not metabolized in the liver and does not bind to globulins that act on sex hormones. In addition to muscle growth, the following effects can be noticed from Anabol tabs as well:

Under the influence of the aromatase enzyme, British Dispensary steroid is converted into the active 17-methyl-estradiol. The increase in muscle mass occurs due to water retention, which goes out when the steroid cycle is finished. With moderate use of the Anabol (Dianabol), significant water accumulation can be avoided.

The main side effect of Anabol 5 tabs are toxicity to the liver and gynecomastia. Since the steroid has a 17-α methyl group, it can have a slightly negative effect on your liver in cases of high dosage or long cycle use. The liver function will restore after the Anabol tab course. To prevent the hepatotoxic effect of the drug, hepatoprotection is recommended.

Even though the steroid is converted to 17-methyl-estradiol, it only slightly inhibits the secretion of men’s testosterone. Not following the rules of use, and taking anabol in high doses can lead to almost complete suppression of testosterone. As a result of hormonal disbalance in men, the mammary glands increase (gynecomastia).

Another undesirable effect of Anabol 1000 tabs in the case of an overdose is water retention. This related to the high amount of estrogen. However, the water stays mainly in the muscles, giving the effect of an even larger volume. To eliminate this problem, it is recommended to take aromatase inhibitors. As a result of the blocking of androgens in estrogens, the water will be getting out from the body without staying in muscle tissue.

Side effects of Anabol also include:

To avoid high blood pressure, it is recommended to take anti-estrogens and antihypertensive drugs after consulting a cardiologist. Despite the fact that the drug increases endurance, it is not recommended for athletes who are competing in athletics, as Anabol 5 strengthens muscles and disrupts the process of supplying cells with oxygen.

The use of large doses and uncontrolled administration can lead to testicular atrophy (reduction in size and impaired function). With a long Anabol 1000 tabs cycle if there is a genetic predisposition to this develops hypertrophy or enlargement of the heart.

For female athletes, even small doses are prohibited. In high doses, British Dispensary methandienone leads to masculinization. It is manifested by facial hair growth, clitoral enlargement, voice coarsening, alopecia. Masculinization processes in all cases are almost irreversible. To avoid unwanted effects, it is recommended to take long breaks between Dianabol cycles.

How to take Anabol tabs

British Dispensary tabs go well with all AAS and in most cases, athletes use Anabol 5 as part of mixed cycles. Since the steroid acts quickly from the beginning of the cycle this allows the athlete to accelerate the anabolism in the body until the moment when more powerful steroids come into effect, for example, Deca.

For PCT after the cycle, it is recommended to use Tamoxifen for a month. To restore the secretion of your testosterone, include nutrition like testosterone boosters.

Anabol tabs have a short half-life. For this reason, it’s better to take Clomid or Nolvadex directly after the cycle. Also during the AAS cycle, it is better to pass a blood test and if the estradiol level is exceeded, it is necessary to start taking Arimidex. The duration of post cycle therapy is from 2 to 4 weeks.

Athletes who took Anabol from British Dispensary noted its effectiveness. In most cases, the reviews about the steroid are positive, especially in combination with other steroids that neutralize side effects.

Many trainers recommended it because of the ability to prevent muscle fibers destruction in the post-workout period. Weightlifters “with experience” recommend taking Anabol tabs to build impressive muscle mass size.

More about this steroid you can read here.